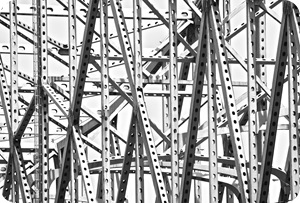 This is the first in a series of posts talking about the story structure known as “The Hero’s Journey.” I’m borrowing heavily from “The Writer’s Journey: A Mythical Structure for Writers 3rd Edition” by Christopher Vogler. This is my interpretation of it, and I’ve tried to highlight some pitfalls I see writers falling into. Click here to review other installments of Story Structure.

First some definitions for the purposes of discussion:


The Ordinary World is the place where the hero’s journey begins. It’s not what we think of as “backstory” but it can include some. For this series of posts, I’m going to use an American football game as the backdrop for a complete journey. Our story starts as the players line up for the opening kickoff. What is going through our hero’s mind? What are his immediate concerns? The Ordinary World shows us where the hero starts, what his current flaws and strengths are (mostly flaws), and why his life must change. It’s essentially the thesis statement of the book. 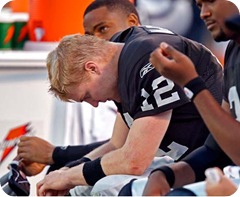 Our hero, a quarterback, is waiting on the sidelines. The coach tells him he’s starting someone else instead, so we introduce instant conflict. We don’t have to know the history between them. We don’t need to know the team’s records, the names of the players, or anything else. What’s important to establish right away, first page, first paragraph, first line if possible, is what hero’s goal is and what the obstacles are. He wants to play. Coach won’t let him. Conflict.

One of the major conundrums that writers struggle with is “where and when do I start my story?” We’ve heard advice like, “start the story as late as possible” but it’s also possible to start the story too late. Part Two of the Hero’s Journey is called “The Call to Adventure” or “The Inciting Incident”. It’s very tempting to start the story in Part Two. You want to get right into the story and the action. A shot rings out. A body is discovered. Part Two is the first glimpse into something known as “The Special World,” a magical place where the normal rules don’t apply. Our hero is a career benchwarmer. The incident that ignites his transformation could be that the starter goes down with an injury. We don’t want to start right with the injury and throw our hero into the mix. We don’t want to start the night before when our hero is doing his homework and contemplating how much his life sucks. I think the right moment to start a journey is when the hero’s overall goal is thwarted by a major obstacle. In this case, our hero’s Ordinary World is one of underachievement, low confidence, and frustration. This is nothing new to him, this is his life as he knows it. His current state summarizes his life up to this point. When the coach informs his once again that he’s not worthy to start, his life is now “on the clock.”

The second consideration to ask yourself is, “what must the hero learn by the end of the journey to achieve his goals?” What are the major lessons and transformations? What are his dreams? How does his goals change? This is another clue as to how to shape the Ordinary World. Note that just because he starts out with a goal, don’t assume he achieves these goals. Maybe our hero will never become a regular starter. Maybe the “lesson” he learns his to make the most of his one opportunity. The point is to make sure that he doesn’t have the skills or ability to achieve his goals in the Ordinary World. He must survive the journey through the “Special World.” So, in the Ordinary world, he’s a person who’s missed opportunities. He’s not paying attention to the game. He’s distracted by a demanding cheerleader on the sidelines. His mom has been nagging him. His dad mocks him. His brother had a scholarship to a major college but our player is about to be kicked off the team. He spends too much time playing XBox instead of working out. All you need to do is paint a picture of a character whose life is about to change forever…and for good reason.

Another good thing to put in your Ordinary World is some foreshadowing to the main conflict of the story. He’s always dreamed of throwing a winning touchdown. Or any touchdown for that matter. His cheerleader girlfriend insists she must talk to him right during the game. His father is conspicuously absent on the sidelines. His coach chews out some other player. The opposing team takes cheap shots and gets away with them while the refs look the other way. Give your readers some hints that “all is not well” with the world. Lightning flickers on a faraway hill. Your hero may be completely oblivious to these signs, completely preoccupied with his Ordinary World issues, but the reader begins thinking, “huh. Looks like a shitstorm’s coming and this guy’s clueless. I wonder what’s going to happen.” If you start with the lightning storm, the pregnant girlfriend, the injured player, the screaming coach, the vicious opponent, then he’s dumped into that “Special World” and it’s just waaay too soon. He has no tools, he has no options. He’ll just run away screaming (and so may the reader). You need to show the reader why all these things are going to impact the hero. Heroes need convincing to enter this Special World, they can’t just fall into it.

The Ordinary World could be the most important section of your novel. It contains the “hook,” the first few pages where you entice an agent or publisher to request a full manuscript review. It’s tempting to throw the reader right into the action. A quick teaser is fine, like a prologue or something off to the side, but I feel like the best thing is to establish the character in their normal world, a world where they are lacking in skills to continue their present course. If you create a “Special World” like a fantasy world, or a historical setting, or a Sci-Fi universe, it’s critical that you don’t focus on explaining this world. Or your character even. Just focus on showing that your character is about to embark on a journey that will change their life forever, but they have no idea that it’s about to happen. They could be a Starship Captain, a Vampire with a Soul, or a clerk at the 7-11. I don’t need to know the details of Hyperdrive or the mechanics of the Slushy machine at this juncture. Maybe these are details the hero needs to know to succeed. 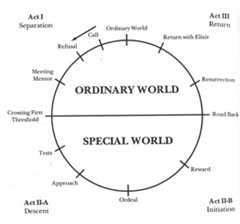 The final thing to note is that the character should eventually return to the Ordinary World, but not as the person who left on this journey. Perhaps the story ends with our hero at the start of another football game, perhaps even at a college game the next year, this time with confidence and knowledge of how to succeed. The circle is complete. This is another reason why it’s important to have an Ordinary World, to illustrate how far the character has come since he started his journey.


Now there is no absolute “right way” or “wrong way,” no concrete rules set in stone, and plenty of counter examples for everything I’ve stated. This is just an example for you to consider when you plot your story.

Let me know your thoughts on this. How do you like to start a novel?

Gonna write a fifty thousand
Carry me home to see me win
Writing words about the Ross’s
I miss NaNoWriMo once again.

Well I heard some people bitch about it
Well I heard it’s no way to write
Well I hope that they’ll remember
There is no wrong and they ain’t right.

In Seattle we love our writing (ooh, ooh, ooh)
We always win, nothing you can do
Now we’re back and we are ready
To show the world we have writing flu (how ‘bout that?)