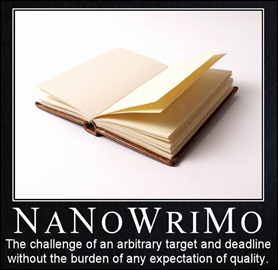 For this year’s NaNoWriMo, I decided to go a different route. Instead of continuing Steam Palace, I decided to use a concept that I had been toying with for years. I wanted to focus on the story of this brilliant detective who’s completely incapacitated, but it turned into something more akin to my first couple NaNo stories, the 30 Days series. More action than mystery, more plot than characters.
First, the facts:
Final Title:
Dead Air: An Archie Magnuson Mystery
56,937 words, my lowest output in 4 NaNo’s, but still a “winner.”
Actual days writing: 25
2,200 words/day, compared to something like 3,200 words/day last year
47 “Scenes”
My goal was lower this year. I was aiming for 60K, so I timed my book accordingly. My 80K first draft last year swelled to 120K by the time I finished 3 revisions. So using the same math, my 56K book may wind up around 84K, not a bad size.
But overall, I’m just not satisfied. I think I know some of the main issues that I fought against this year: Note that most of this stuff I was aware of while I was writing, but I just turned off that damned inner editor and went with it.
I’m not sure going forward that NaNoWriMo is the best way to draft a novel. Especially this year when I couldn’t devote as much time as I’d like to plotting and even writing it. But I guess so far I’ve only highlighted the negatives, so here are some positive things:
So I guess I’m giving myself a mixed grade this year. So what will I do from here? Probably shelve it. I could also do a quick 1-2 week edit and throw it up on some sites to get feedback. But right now I really need to work on selling Steam Palace. I also have a few deadlines for conference submissions.
I hope everyone had a good NaNoWriMo, see you next year!

Part of the fun of NaNoWriMo is imagining what your cover would like like. Heck, what’s the title of your story? I’ve gone through a few variations so far such as “The Bed Detective” and “Big Woman Detective”. There’s a phrase that keeps coming up in my story. “Dead Air.” I ran it through Lulu’s Title Scorer and it earned a whopping 77% likelihood of being a best-seller. (Steam Palace ranked like 33%. D’ooh!).

After today I’m taking a brief hiatus from NaNo to participate in SteamCon. I really hope I have a couple minutes of downtime to write maybe a couple hundred words here and there, but I’m not planning on it. I’m at 39K today and I’ll be well over 40K by lunch. Then on Monday it’s the race to the finish, my goal being 60-65K.
Now, without further ado, let me present the cover of my NaNoWriMo 2010 book Dead Air: 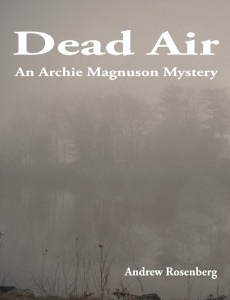 I’m hoping that looks a bit ominous and not serene. I played with the image to wash out the colors even more and make it really drab. The image had absolutely nothing to do with the story but it’s more about the mood.
at 8:47 AM 4 comments: 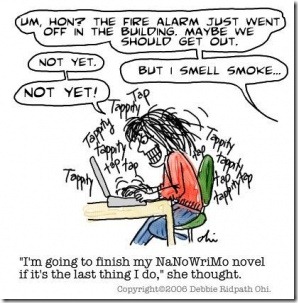 Well, so far, so good. I’m sitting here at the halfway point of with 32K words, my target being ~60K words. Unfortunately, my four “days off” are coming soon. I’m going to be at Steamcon Fri, Sat, and Sunday this week, and next week I traditionally take T-day off (but make up for it on Black Friday in an all-day writing spree). My pace is well under last year, especially considering that my wife wrecked her car last November and I lost a lot of time due to that…and I still finished 5 days early. This year my target is lower, and I’ve been working on a couple other things.
So storywise, it’s interesting. I’m writing a completely contemporary mystery, no Sci-Fi, no secret agents, just everyday people. Okay, there’s a mad scientist. D’ohh! Well, I never worked a good mad scientist into Steam Palace, so I guess some of that rubbed off. But still, it’s not science fiction, I promise.
I’ve stuck fairly well to the storyline. There have been a few characters that I created who I’ve never used, and a few that are creeping out of nowhere to take prominent roles. The plot has more holes than a gun range target, and it’s not all that close to what I started with, but I kind of expected that.
Here’s the thing to remember as you draft. Don’t let your plot run the story. Characters should always drive it. Emotion. Fear. Anger. Love. Week 2 is always the hardest week, because once you’ve introduced the characters and the world, then what? I had in mind a scene where my detective and the damsel in distress are in a car and the car flies off the road into a lake where they almost die. That was my goal. But that was plot. I had to know why they were in that car, why no one else was in it, and where they were going.  (I had a couple of near-drowning scenes in the first draft of Steam Palace that didn’t make it into the second…again when I have ideas I’m determined to use them).
So with that scene in mind, I started creating complications. Intrigue. Questions. Characters who acted unexpectedly. Relationships develop. When I finally hit that critical scene, now the whole rest of the story is unfolding. I now a vision of the final climactic scene, the “reveal” as it were. That scene will be the driving force for the next 2 weeks. That’s the make-or-break part of the book. That’s when my hero will be tested and he’ll know once and for all who his true friends are, and whether he has what it takes to be a true detective.
The other thing was that whenever I got stuck, I just think of another scene to write, something where two characters interact in some way.  I don’t know how, but it just sort of works. This is why you have to just rely on your characters. Give them strong goals and motivations, and let them do their own thing, even if it takes your story somewhere else. That’s the beauty of NaNoWriMo, you never know what you’re going to get.
You’re over the hump, and it’s all downhill from here!
at 9:10 AM 4 comments: 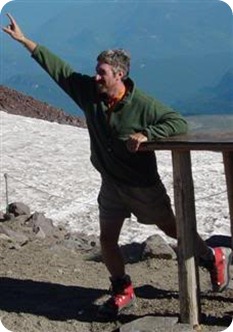 Okay. I know a lot of you are heads-down in the midst of NaNoWriMo. Others have decided to pass. Either way is fine with me. Apparently, it’s not fine with everyone.

Laura Miller, senior “writer” at Salon.com (yeah, I meant the quotes), who admittedly “as someone who doesn’t write novels” has this to say among other things:

But even if every one of these 30-day novelists prudently slipped his or her manuscript into a drawer, all the time, energy and resources that go into the enterprise strike me as misplaced.

(read it all here)

Lastly…“misplaced”?? WTF? Why do anything then? Why plant a garden if it dies in the fall? Why finish a jigsaw puzzle if you just break it up and put it back? Why have kids if they just grow up and have their own families? Why breathe in if you’re going to breathe it out again?

People like Laura Miller don’t “get it.” They don’t have the spark of creativity, so they can’t appreciate it in others. Why build crap? Why write 50,000+ words that you will just throw away? What if Picasso stopped after his first crappy painting? What if Mozart stopped after his first off-key note? Yeah, are all 170,000 participants in NaNoWriMo the next Mark Twain? No. But…yes. They are. They are the seeds of something greater, that when cultivated may grow into a story for the ages. Sure, maybe you wrote 50,000 words of crap, and tossed it away, deleted the file, whatever. But you are not the same person you were before. You’ve changed. You’ve learned. The next 50,000 will be better. The next 50,000 better still.

A couple years ago I spent all my free time training for a summit climb of Mount Rainier. Every weekend was a massive hike. Every day another workout. For 8 months. And then, when all was said and done, I didn’t make it all the way to the top due to altitude sickness. Was all that time wasted? Was the money I spent on gear and training and the expedition misplaced? What do I have to show for it? Well…I have nothing. BUT. I climbed to 11,000 feet. That’s 11,000 feet more than most people have ever climbed. Will my NaNoWriMo novels ever be published? Or will they fall short? Am I just wasting my time, pretending that I am something I’m not? Are we all just wasting our time?

Here’s the thing. No one writes because they are forced to. People write because they’re driven to write, to say the things that no one else can. Here’s one last thing Laura Miller said, and it’s something you should all think about:

Frankly, there are already more than enough novels out there

Yours. And you’re the only one who can write it.