Thanks to Livia Blackburne for hosting the Alternate Version Blogfest.

PLEASE VOTE FOR WHICH BLOGFEST I SHOULD HOST! 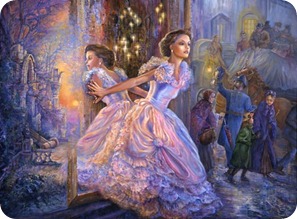 I chose a scene from my WIP Steam Palace where Prudencia, my main character, meets Lily for the very first time.

A rustling noise shivered the door. Prudencia shot up, feeling vulnerable with only a towel to cover her nakedness. The door opened, and a figure stepped in, closing and latching the door behind. The figure removed a cloak and turned to face Prudencia.

Prudencia held the towel tightly. “Um...hello? Who might you be?” The person who had just entered didn’t look much like a housemaid. She bore long golden hair, a contrasting dark complexion, and her low cut shirt revealed half her bosom, which had been enhanced with some kind of tight corset. Dark liner circled her eyes, and her lips were painted a painful red. Her skirt ended shockingly right below her hips, exposing her knees and ankles. Prudencia wonder if some street walker had just walked in by mistake, not that she knew what one looked like except in books of course.

Prudencia studied the girl. Buxom, handsome, mixed ancestry, but the kind of figure she knew men sought. She grasped the hand and shook it. “Aunt Bea—I mean Lady Harwinton is not up yet,” she commented.

“She never is.” Lily lifted a sack and handed it to Prudencia, who managed to grasp it without losing her towel. “Put that on the counter, would you dear.”

“For how long?” Lily eyed Prudencia.

“For—as long as I want, I suppose. She wants to show me Hartford.”

Lily laughed. “Not much to see here. Factories, banks, whale rendering plants, machine shops, a lot of boring stuff. If you want some excitement, you’ll have to leave this part of town.”

Okay, I call that “Welcome to Snoresville.” So during revision, I completely changed Lily’s character into someone much darker, and changed her name to Viola. I wanted her and Prudencia to be in conflict from the first second they meet. In the first draft they become fast friends. In the new revision, they hate each other…but they will be forced to work together and overcome their differences. So here is the “alternate” version of their first encounter:

Prudencia woke to the sounds of rummaging. Judging by the moon’s progress, dawn’s arrival would be imminent. She pulled on a thick woolen robe and wrapped it against the night’s chill. Something downstairs clinked and clattered. She stepped into the hall and glanced into Bea’s room from which emanated the soft sighs of sleep. Could some stray animal be foraging in the house? She grasped a baleen broom from the corner of the hall and crept down the stairs, prepared to beat away any crafty raccoons who might be pilfering the pantry. The nocturnal animals were regular infiltrators in the Wethersfield Manor, and a strict beating would usually deter future infiltrations.

She froze near the bottom. This was no animal. A dark figure moved among the shadows. An intruder. Prudencia clutched the broomstick. The creature dropped something and cursed. A woman’s voice. She peered into the unfamiliar pantry, searching for an accomplice, but the female felon worked alone. She spotted no sign of forced entry, but the darkness could conceal the evidence.

“Come on, where is it,” muttered the figure.

The intruder lit a small lamp. In mere moments, Prudencia summed up the figure before her. A black corset and dress, long dark tresses of hair, and deep colored eyes revealed the hallmarks of a lady of the night. Prudencia might have been raised in Podunk, but she knew enough of the world to notice the bright painted lips, the red sash, and ambergris scent of a prostitute. As she computed this postulate, the woman’s gaze fell upon Prudencia. A thick silence gripped the air as both women appraised the situation.

The black-clad intruder sprang for the door, but quicker than thought Prudencia blocked her, wary of her sharp red nail-tipped fingers. She waved the broom above her head. The thief crouched like a cat, her gaze darting about the room. “Who are you,” demanded the intruder at last, pointing a finger at Prudencia. “What are you doing in my house?”

Apparently, there’s more to “Alternate Version” than I thought…many people are alternating genres….so here’s my attempts (very off-the-cuff and unedited)

Agent Stratton woke to the subtle noises. She was instantly awake, every sensory nerve firing at maximum. She downed a stim, just in case, and checked her Glock as quietly as possible. Something stirred down in the parlor. She had come to this B & B her aunt run as a vacation, and now she feared her past had found her. She slowed her breathing, and hugged the walls as she crept down the stairs.

Down in the kitchen, a dark figure rifled through drawers. Dressed in black riding clothes, a helmet sat on the counter, along with a brown leather duffel. Stratton noted the curves of a woman. She hoisted the gun to eye level.

“Drop it,” she said, but before the words left her throat, she must have made a telltale noise, because the intruder pulled her own gun. They stared each other down.

The intruder spoke. “Who the hell are you, and what are you doing in my house?”

Prudencia woke from her usual dreams, her body tingling with a lust no man could satisfy. A noise echoed from downstairs. Throwing on a sheer silk, she stumbled down the stairs, wondering who dared disturb her delightful slumber. A woman pawed through drawers in the kitchen, but not any woman. Perhaps another guest, Prudencia could not remove her gaze from her curvy figure, her pert breasts, her deep eyes and tumbling hair. She drew in a sharp breath, and the figure turned to her.

The both watched each other as time stood still. Every sense in Prudencia’s body came alive. She dared not hope for the impossible, that this woman shared her desires. At last the angel spoke.

“Please tell me you’re staying here too,” she said, her breast heaving with emotion.

A chime woke Prudencia. Words flashed across her vision, something about a visitor. She rolled out of bed which deflated and retired to its box. She waved and arms fell out of the closet, throwing clothes on her. She checked her message list and feeds, finding nothing of import. Her hoverpad approached, and she stepped on. “Downstairs,” she said, and the pad pushed her along while a head spider arranged her hair.

She stopped at the bottom. A readout appeared in her vision, identifying the person who rummaged through the kitchen.

Yes indeed, the android bore the trappings of a pleasure provider, the vinyl and rubber of a machine dedicated to the whims of its clients. The machine turned to her.

“Return to your designated quarters and you will not be harmed.”

I hope you enjoyed those!