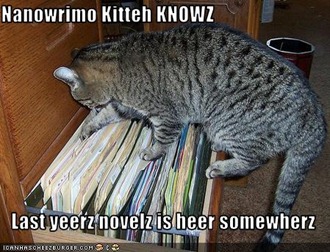 Yup, it’s already that time of year, for those of us infected with write-a-novel-in-a-month fever. September 1 is the date when I officially log on to NaNoWriMo.org and start planning my next big novel.

Right now I’m in the midst of final edits for my 2009 NaNo novel Steam Palace. I may pick up my 2010 NaNo novel Dead Air and edit that soon.

So what’s the big deal about NaNoWriMo? For me it’s something about the pressure of writing ~1700 words a day no matter what. It gives my writing a sense of urgency, and it also limits my ability to go off on tangents in the story. 1 week for Act 1, 2 for Act 2, and 1 last week for Act 3. No 50,000 words of backstory. Keep to the script as it were.

Now why start planning my novel on September 1? Why not just sit down on November 1 and start writing?
3 main reasons:

The next step is to figure out a general plot. What happens. What must happen. For me I thing of the beginning and ending. What’s the premise?

For last year’s NaNo Dead Air, my premise was something like this:
“Invalid woman solves crimes without ever leaving her bed.”

For Steam Palace it was:
“Girl has to choose between love and power/fame/fortune.”

For Teen Alien (not written for NaNo BUT written in 30 days):
“Girl with extraordinary abilities discovers she’s an alien and must choose between her friends and the aliens who come to claim her.”
—although it was actually simpler than that:
”What if there was a planet populated only by women?”

What-if’s are a great way to imagine story ideas:
What if there’s this secret parallel land of wizards/elves/zombies/Republicans right in our back yard? What if you could secretly inhabit a dog/fly/cat/convict’s body and control them? What if there was a plot to assassinate the pope/president/Queen of England/your boss/Seinfeld and you were the only one who could stop/do it?

Don’t want ‘til the end of October to start imagining this stuff. Imagination starts now!

So what am I going to do for NaNo? I have no clue. I have a couple original story concepts (well, one of which is essentially Tarzan fanfic if you can believe it), a couple of sequel concepts to stuff I’ve already written. Right now I’m leaning towards a sequel to my Mystery novel from last NaNo. I really like the characters and the conflicts that are inherent in their lives.

One way to choose is to consider your options and ask which one you are most passionate about. Don’t think about which one will sell, which one will be “easier”. Find a story you care about so much that you are willing to abandon everything else for one month to write this story. A story you cannot wait to write. Then spend all the time you can between now and November doing character charts, plot outlines, world building, and whatever you can do to prepare yourself.

Or just wing it. Just be prepared to put pen to paper (finger to keyboard/quill to parchment) on November 1, 2011.