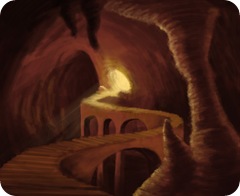 This is the seventh in a series of posts talking about the story structure known as “The Hero’s Journey.” I’m borrowing heavily from “The Writer’s Journey: A Mythical Structure for Writers 3rd Edition” by Christopher Vogler. This is my interpretation of it, and I’ve tried to highlight some pitfalls I see writers falling into. Click here to review other installments of Story Structure.

Approach to the Inmost Cave

This is perhaps the most nebulous and hard-to-understand step of the Hero’s Journey. At this point, your Hero has gathered Allies, engaged with some dark forces, and has met with his Mentor. He’s ready to take on the main antagonist But first, he must endure an arduous process on his way to the main Crisis of the story.

What is this “Inmost Cave?” It’s the enemy’s lair. It’s the embodiment of the Hero’s fears. It’s a place where few tread, and fewer return from. It’s the furthermost point away from where the Hero started his journey. The Death Star. The Emerald City. The Bedroom. The Courtroom. Jail. The Dragon’s Lair. This the place where every decision has life-or-death consequences, where the stakes are at their highest. But before this Ordeal, our Hero must get there. He must prepare himself for battle, arm himself with information, learn the final lessons, remove all doubt, and commit himself to the Journey.

Let’s look at our benchwarming-but-now-playing Quarterback. He’s on the field. He’s made a few plays. He’s starting to feel out this Special World. He throws a touchdown. Success! Maybe he can prevail in this world, maybe he does have what it takes. But the Enemy is huddling, changing their strategy. The stakes are going to be raised. There’s about to be an Ordeal near the end of Act II. He will be tested. What can we do as an author to Raise the Stakes? We’ve got the girl on the sideline. He’s now sitting on the bench while the other team has the ball. She approaches him…she’s late—it’s not his. His mind is now distracted, hurt. Still no word from his parents…what’s up with that? 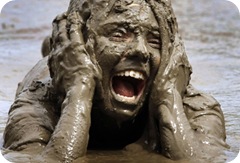 They get back on the field. He throws incomplete passes and they punt. Coach is yelling and screaming. He’s going to have to clear his mind, find a way through all these distractions. And guess what? The other team knows about his girl trouble, and they start taunting him. Even the old coach on the sideline is getting agitated with him, trying to set him straight. His early success is falling by the wayside, he’s going to have to reach down deep, because with 2 minutes left in the half, he had little time to prove himself before the head coach puts someone else in. His friend the receiver is ambushed by an illegal crack-back block and is now out of the game, taken away in an ambulance, perhaps crippled for life. Now it’s time for our Quarterback to rise to the occasion and start kicking ass. And I have no idea how that picture relates but I just liked it. :)

Approach to the Inmost Cave Goals

Is your Hero armed and ready for his first major conflict? Are the Stakes high enough to convince him to take on the dreaded Enemy?